What is Coordinate Measuring Machine (CMM)?

A coordinate measuring machine (CMM) is a device for measuring the physical geometrical characteristics of an object. 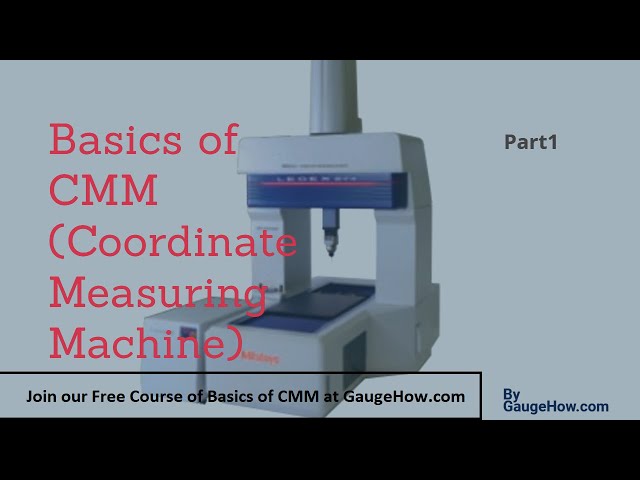 A coordinate measuring machine is a device that measures the three-dimensional coordinates of an object. It is used in a variety of industries, such as automotive, aerospace, and medical device manufacturing. CMM can be used to measure the dimensions of parts, to inspect prototypes and production parts for quality, and to create three-dimensional models of objects.

How does CMM work?

A coordinate measuring machine (CMM) is a device for measuring the physical geometrical characteristics of an object. CMMs are usually used to measure the geometry of mechanical parts and assembly. A CMM can be used to measure a wide variety of features, including linear dimensions, angles, and curvatures. The data collected by a CMM is typically used to create a three-dimensional model of the measured object.

The basic principle behind CMM operation is relatively simple. A moving probe is directed towards a series of targets attached to the object being measured. The probe measures the distance between itself and each target, and these distance measurements are used to calculate the coordinates of the target points. This process is repeated for multiple targets, and the coordinates of all the points are then used to generate a three-dimensional model of the object.

What are the benefits of CMM?

Operators use CMMs to inspect parts for defects, verify tolerances, and ensure that parts are compliant with Quality requirements. By doing so, CMMs help reduce scrap, rework, and warranty costs while also improving product quality.

CMM’s are used extensively throughout the automotive industry, from design and manufacture through to assembly and final quality control. Automotive components are subject to increasingly demanding safety, reliability and performance requirements, which in turn places greater emphasis on ensuring the dimensional accuracy of components during manufacture.

A CMM can be used to measure the following:
-Bodywork features such as panel gaps and interior volumes
-Suspension and steering components
-Engine blocks and cylinder heads
-Wheels and tires
-Exhaust systems
-Gearboxes

The machines provide critical dimensional data that is used to verify that parts meet engineering drawings and specifications. This data is also used by engineers to perform reverse engineering and design modifications. In some cases, the machines are also used to inspect final products prior to shipment.

In the medical industry, CMMs are used to create models of human anatomy for prosthetics, implants, and other medical devices. They are also used to create customized braces and orthotics.

A coordinate measuring machine (CMM) is a device that measures the physical geometry of an object. CMMs are used in manufacturing, quality control, and metrology.

There are several different types of CMMs, each with its own strengths and weaknesses. The three most common types are optical, mechanical, and laser.

Optical CMMs are the oldest type of CMM, and they use a system of projection and reflection to take measurements. They are very slow and not very accurate, but they are very affordable.

Mechanical CMMs use a system of moving parts to take measurements. They are much faster than optical CMMs, but they are also more expensive.

Laser CMMs use a laser to take measurements. They are the most accurate type of CMM, but they are also the most expensive.

No matter which type of CMM you choose, you need to make sure that it is calibrated properly before you use it. Otherwise, your measurements will not be accurate.