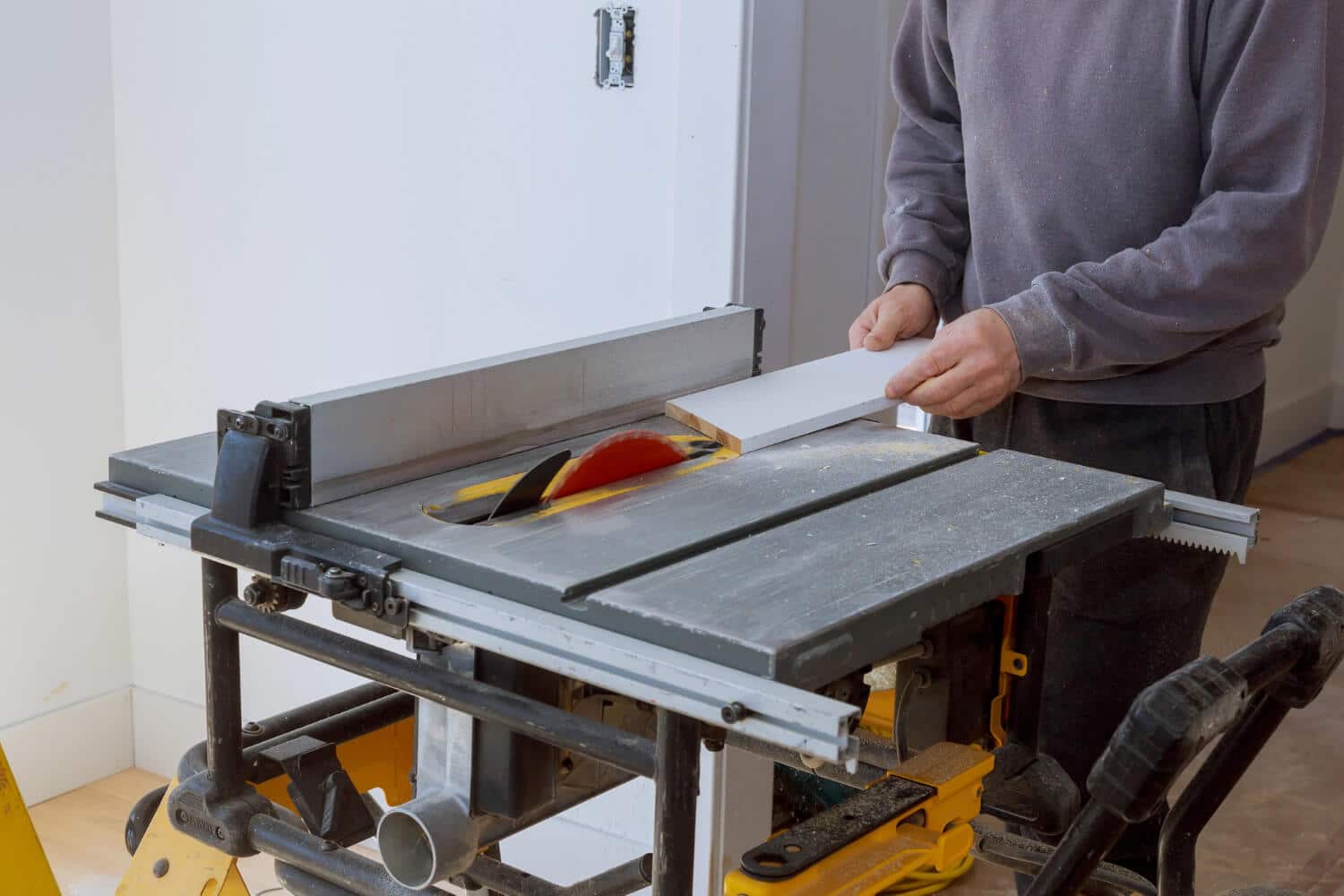 Why a table saw? Most of the part time woodworkers and hobbyists use handheld saws to complete their small works but there comes times when handheld tools are not able to meet the requirements for tough cuts. That is the time when even professionals need a powerful tool to work with! A table saw can surely be the best choice for them.

Table saw consists of a circular saw blade which is fixed to an arbor. That is driven by an electric motor (either directly or with the help of belts and gear systems). The blade appears out on the top of the table. Underneath that table there are hand driven wheels which are connected to the bottom of the table by long threaded screws. By driving them, you can adjust the height of the table. It also makes you able to adjust the blade amount that goes through the materials.

Table saw is generally a fixed place tool. It is used for rip cutting, cross, and with the wood grain cutting. It is quite a facilitative tool that enables you to work precisely. Table height adjustment, angling and beveling of the blade are key factors that make table saws immensely liked  tools among the woodworkers.

How Many Different Types Of Table Saw Are There?

There are three basic types of fixed placed table saws, contracted, hybrid and cabinet table saws. These types of table saws are heavier in weights, larger in size , powerful and accurate in operations as compared to portable table saws.

As the name states, cabinet table saws profile configuration makes them look like a cabinet! These saws are Specifically designed for professional woodworkers and bulk production houses.

Cabinet saws have very confined configuration and protection systems. a 3 to 5 horsepower single phase induction motor is used in these saws. High end circuits and switch boards are used to operate this induction motor. Each and every part of the running assembly is craftly placed in a cabinet which makes it safe to work with.

These saws come with extensions and adjustments to increase the rip capacity of the wood. It is normally used to work with solid logs and large panel sheets at production houses. It has great abilities to avoid damages and it lasts for long too which makes it a reliable tool for professionals.

Contractor table saws are lighter in weight yet powerful saws as compared to cabinet counterparts. These saws are best for homeworkers and hobbyists. The size of motor used in contractor saws makes them different from cabinet saws but that’s their massive profile which provides enough space and power to take on bigger projects and hard materials more accurately.

Single phase induction motor of 1 or 2 horsepower is placed in contractor table saws which is placed at the back end of table saws, a circular saw blade is attached to the revolving arbor, belts are used to attach the arbor with the motor. This motor can easily be operated on casual home supply lines. That makes a huge difference in it’s cost. These saws are not very expensive.

Before the portable saws came into existence, contractor saws were considered alternative if needed. Owners had to disassemble the whole saw and then take the parts to the required place and assemble them again to work with.

Contractor table saws were somehow made portable initially as they can be fixed on a base or stand having wheels so they can easily move around the workplace.

These saws have great features along with few setbacks. The inconvenience woodworkers often come across while working with contractor saws is that these saws create a lot of dust. Motor being placed outside reduces the dust drain efficiency, it eventually makes the workplace filthy.

Hybrid table saws are cross between traditional contractor saws and cabinet saws. Now the term contractor is obsolete since they are not easy to move with and Woodworkers nowadays use other portable types of table saws.

In the hybrid table saws the single phase induction motor of 1.5 to 2 horsepower (that can easily be run on North American standards circuits) hangs in the box which also had a ventilation groove on either side. These saws are not easy to move from one place to another because it’s motor can not be taken out of the box.

Hybrid table saws have composite configuration of inner parts including motor, arbor having blade on it, everything is placed in a small and little bit high from earth box having a table on the top of it. These saws look more like a cabinet saw but are shorter in profile. Dust collection is not a problem in these types of table saws.

Hybrid table saws are made for hobbyists and the people who work at their homes  with small wooden materials. Ripping capacity of these table saws is a lot shorter as compared to other ones.

Earlier we mentioned fixed place or stationary table saws which were not traditionally portable until they are kept on a stand or base having wheels. They were not still portable as portability doesn’t mean to move around in close quarters. These were older models of table saws with less modification and modernization.

From now on we will have a look on the most recent form of table saws that meet modern requirements of mobility and innovation combined.

These saws come with universal motors. Direct drive (motor runs the blade directly) method is adopted to make the blade run. In older models induction motors were used that made the tool heavy and created a lot of inertia because of the small profile hence the saw vibration took place.

Universal motors don’t last as long as induction motors do; that also reduces the efficiency and capabilities of the tool to harder work.

These saws do not possess a greater ripping capacity, that does not let down the tool much because it is specified to at home workers only who often come across heavy works.

Jobsite table saws are larger in size as compared to benchtop table saws. These saws work like a normal table saw, the portability is an ultimate factor that makes them considerable to carpenters.

It is not possible for all the time to bring the job to the saw. It means that whenever you need a table saw way outside of your workshop, a jobsite table saw would be an ideal option for you as it presents similar working capacities a conventional table saw does!

These saws also come with universal motors but a bit powerful one! Normally of 15 to 20 amps.

Jobsite table saws are very compact in size hence they can be fixed over working tables or stand anywhere you want to start your work.

Compact table saws are best for carpenters and woodworkers who work remotely in different areas. It becomes their prime tool to go with because it is too easy to move around and work with.

Old school woodworkers are very much concerned about tool size, power and weight. Compact table saws cover all aspects that a woodworker would love to see in the table saw like ripping capacity, fencing and size.

These are larger table saws as compared to other portable ones, they can be placed on a fixed stand which also provides them great strength against pressures that the crafter applies.

The size of table in these saws is smaller, this saw type also comes with universal motors. The blade assemblies are generally run by belts. In latest models cast iron tips are placed on the belts to enhance the friction of arbor with  the motor.

Another variant to the table saws that makes them even portable. Cordless table saws are greatly renowned when it comes to portability. Lot of traditional saw manufacturers also build cordless table saws to help out the crafters as they can be used in indoor workplaces.

These saws normally use 18v lithium ion rechargeable batteries to run. The battery capacity and rating might change with respect to size to the saw.

These saws can work on ceramics tiles as well as wood materials. The water containment feature makes it reliable to work with the cemetery. These saws also have water pumps that sprays the water on the tiles during the cutting process to keep them cool.

These table saws typically have blade arbor of 30mm diameter. Sliding table saws are mainly used to cut large panels sheets like plywood, there are special editions of sliding table saws too that come with a scoring blade (a small diameter bladed attached right in front of conventional saw blade) which controls the damage to the lower fence of materials.

In the final analysis it has been concluded that all of the table saw types are quite similar in workings but it is their construction and build contradictions which makes them different from one another and it also changes their abilities. So now it’s up to you to pick the particular saw type which meets your requirements. Surely, just an appropriate tool would be able to complete the job satisfactorily.

Keep in mind that we may receive commissions when you click our links and make purchases. However, this does not impact our reviews and comparisons. We try our best to keep things fair and balanced, in order to help you make the best choice for you.

As an Amazon Associate, I earn from qualifying purchases.